After just over a month in the Caribbean...

On 7th September 2016, I flew out to Lisbon, Portugal to join my first vessel, the MSY Wind Surf. The Wind Surf is operated by Windstar Cruises, and is the largest vessel in their fleet, carrying up to 310 passengers and 215 crew members. The MSY Wind Surf is also currently the largest sailing cruise ship in the world. 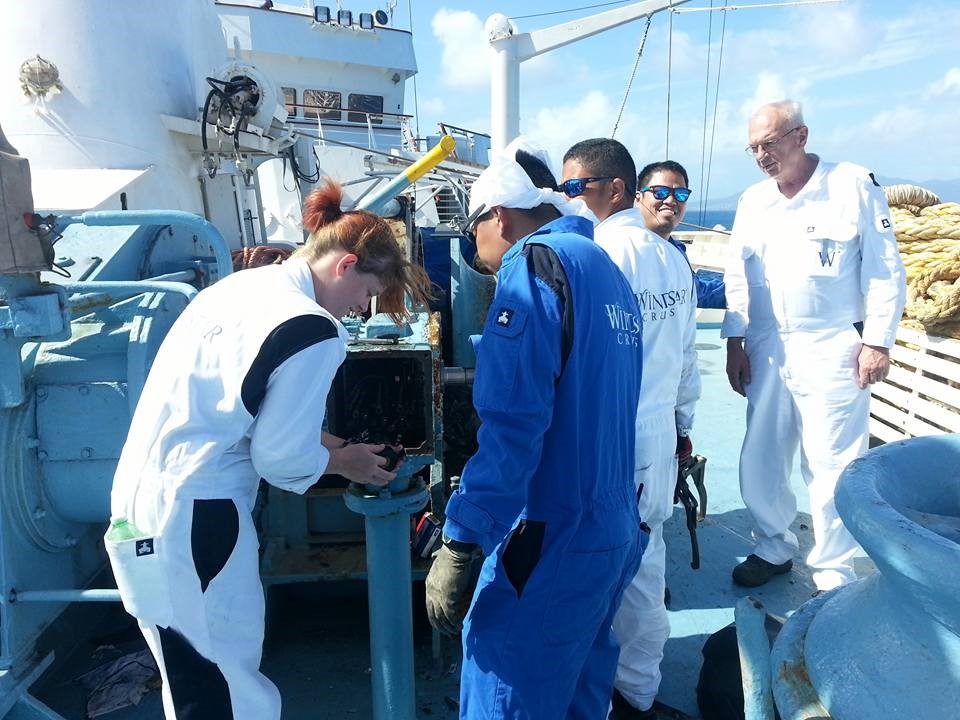 After completing my introduction training (security, emergency situations and a safety tour), and receiving my uniform, I found my cabin and prepared for my first watch which was to commence at 6pm. After introducing myself to my shipboard training officer, I was tasked with familiarising myself with the engine room and finding out as much information as possible about systems on board and their operation, alongside completing my safety familiarisation of the engine room.

Over the coming weeks I was trained in arrival and departure procedures, and given the responsibility of starting and stopping the water generation plant on board in addition to completing the shipboard records and logs. I also took part in bunkering operations and was talked through the checklists and legislative requirements for the vessel.

While I enjoyed these tasks, my favourite jobs were hands on maintenance and fault finding, such as dismantling one of the 30 bar air compressors. After completing the scheduled overhaul with the third Engineer, the compressor was not running as efficiently as was expected. We traced the system and dismantled the compressor again to find a faulty valve. This was then replaced and the system reassembled and tested. I also assisted in overhauling the diesel and lub oil purifiers on a regular basis, initially with the third engineer and later alone with the motorman’s assistance. Regular maintenance of these types of equipment increased my confidence of the system’s operation and of my fault finding ability.

During my time on board I was also given the responsibility of conducting the on board cooling water tests. This involved testing the cooling water for chloride levels, nitrite levels, pH and conductivity. The results were analysed and checked by the officer of the watch and the water dosed accordingly for each system. Due to my background in Chemistry, I found these tests very interesting and picked up the procedures and calculations quickly.

One of the most enjoyable parts of my sea phase was the fire drills. Initially I was required to muster in the engine control room (ECR) with the engine team and act as scribe for the drill. This included relaying messages from the fire team, medical teams and on scene commanders via radio to the team in the ECR, and logging the locations and actions of all emergency teams. After a few weeks, I was allowed to partake in the fire team training sessions. The team was mustered on the aft mooring deck and timed as we dressed into our suits and went on air. Three attempts were given to get dressing time down to under two minutes. Once dressed, each member of the team was given a chance to practice with a charged hose, before we took part in a drill exercise. The fire drills themselves were conducted randomly once a week, and took place in a different part of the ship each week. This ensured that each crew member knew their responsibilities during each fire situation. For example, the engine room team had extra duties if the fire was located in the machinery space. Every crew member must be able to swiftly adapt to varying emergency circumstances.

Around the middle of my sea phase, I was transferred to the Day Service department for a week to broaden my understanding of the different engineering departments. While working with the Hotel Engineer, a qualified 2nd engineer, I rotated my shifts between the boat mechanic, the plumber and the refer tech. Although my time with this department was brief, I saw every aspect of the day service department and had the opportunity to bunker and conduct maintenance on the tenders, in addition to scheduled maintenance on the A/C and refrigeration units.

After spending time working with the Day Service Engineer and his team, I moved to the electrical department for a week. This aided me in completing the electrical areas of my TRB, while gaining a more well-rounded understanding of how the different technical departments function together. A prime example of this was during maintenance on a winch for the portside anchor. I worked closely with both the electrical team and the day service engineer to dismantle the motor and test the windings. During my time with the electrical team, I gained more in-depth knowledge on the workings of machinery through overhauls of motor starters for the tenders and a bubble pump for one of the Jacuzzi’s on board.

Between September and November, the cruise itinerary was based in Europe with the bulk of the cruises taking place around Italy. In mid-November we ended the last cruise of the season in Lisbon, Portugal and sailed to Cadiz to dry dock at the Navantia Shipyard. Dry dock was an extremely interesting experience and allowed me to take part in operations that some cadets may not get to see. The tasks relied on my timekeeping and ability to communicate effectively to people who spoke very limited English. I was also required to remain focussed during a very hectic period on board. Security on board was emphasised a great deal during dry dock as there were a lot of external contractors working on and around the vessel.

After dry dock we began our two week wet dock during the crossing to the Caribbean. This was an excellent opportunity to work under pressure to organise and complete the remaining jobs on board before our arrival and the start of the new season. Upon our arrival in the Caribbean, a small oil leak was discovered from the starboard stern tube. Despite this causing disruption to the cruise schedule, I enjoyed the experience of working with varying departments to solve the issue and ensure that all precautions and actions were taken in accordance with legislation. In order to correct the issue, a team of divers was used to investigate, locate and mend the leak. During these operations, I was stationed on the quayside with other department representatives and the dive team to relay information to the Chief Engineer via radio. This allowed me to deepen my knowledge of stern tube sealing arrangements and to see underwater maintenance first hand via the video screens on the quayside.

During my time at sea I was also invited to attend the hosting dinners with the Chief Engineer. On the hosting nights, we entertained a table of 3 couples at dinner and answered any questions they had about the vessel or about working at sea. The enthusiasm of the passengers had for the engineering department was extremely refreshing. The hosting dinners, combined with conducting the engine room tours, allowed me to increase my confidence about systems by having to explain them to passengers who had never seen this sort of equipment before.

After just over a month in the Caribbean, I disembarked the vessel in St Maarten on the 8th January 2017 after four months on board.

Why Is The Maritime Industry So...

How Does A Maritime Cadet Sponsorship...