April came around quickly and before we knew it so did the end of phase 3. My fellow cadets and I packed up our house in Southampton, said our goodbyes and headed off for our final sea phase.

I was scheduled to join B Gas Margrethe, a 100m LPG carrier, in mid-June so after a month at home I once again packed my bags and headed to Pembroke, Wales. On arrival I found that the ship would be at anchor for another couple of days so I was put up in a local hotel which gave me chance to explore the Welsh countryside. 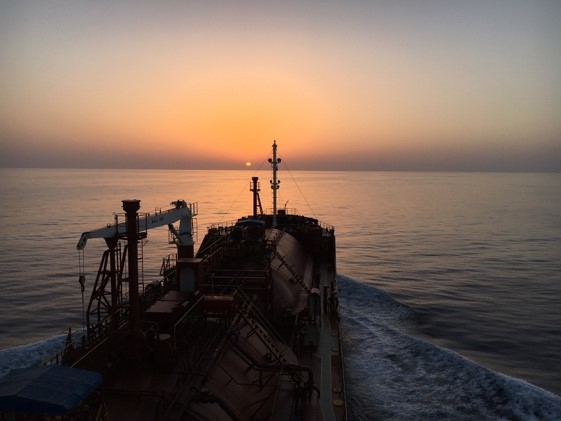 My mini countryside break eventually came to an end and I excitedly headed to join the ship. B Gas Margrethe is about 80m smaller than the Ardmore Sealifter (my previous vessel) and you can certainly tell. With a crew of just 13 at one point I was straight into familiarization of the ship, which didn’t take very long due to her size. Due to this being my final sea phase my duties were mainly on the bridge watchkeeping whilst shadowing the Third Officer on the 8-12. I also worked the 4-8 with the Chief Officer towards the end of my contract. Once in port I would conduct the 6-12 cargo watch under supervision. 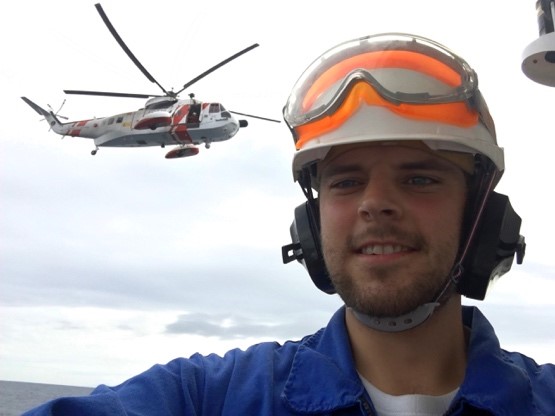 B Gas Margrethe is involved in the tramp trade, so she has no fixed route. Most of the 4 months I spent on-board we travelled to Portugal, Spain, Morocco, Gibraltar, Amsterdam and Wales. Being a coastal vessel we were in and out of port every 2- 3 days. At one point however we spent a couple of weeks in South Spain going from Cartagena to Tarragona. These ports are about 16 hours away from each other and cargo operations took another 20 hours. Due to the size of crew everyone would be up and awake for mooring stations etc., so sleep was certainly a luxury around here. Many a voyage took us through the Bay of Biscay as well so I certainly think I have earnt my sea legs.

I was given a lot of responsibilities on-board and got really stuck in with the Third Officer’s jobs; completing all the inspections of the lifesaving appliances (life rafts/ boats/ etc.) to inspections and maintenance of the firefighting equipment. It was a great learning experience, especially completing the jobs I would be doing as a Third Officer upon qualifying.

The crew I sailed with this time were made up of Eastern European/ Turkish Officers and Filipino/ Sri Lankan ratings. The whole crew got on really well and it really made exploring the ports good fun. From attending an authentic Spanish music festival with the Captain to ice cream and sight-seeing with the Third Officer or sunbathing on the beach with the crew. It was a great experience and certainly made the hard work worthwhile. I even got to ride shotgun in a Spanish police car! 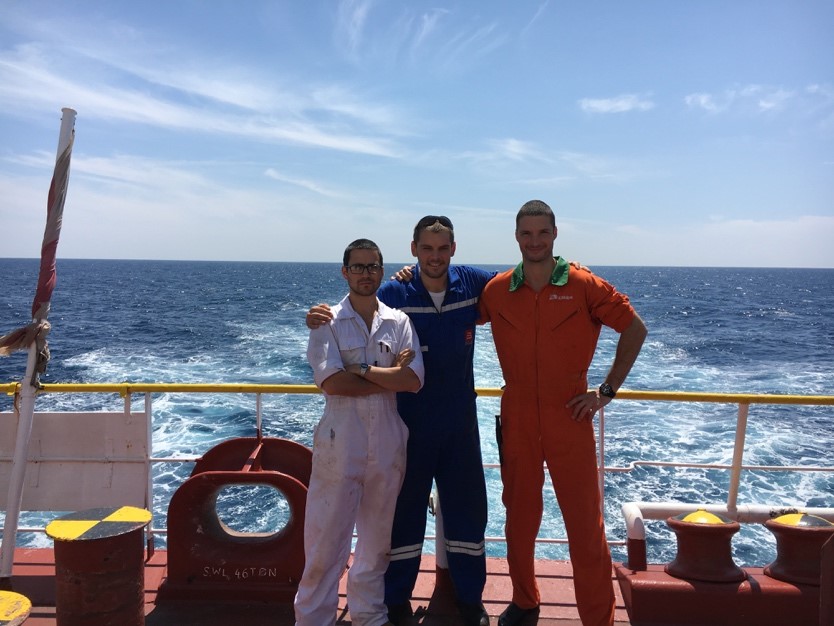 I really enjoyed my time on B Gas as having previous tanker experience I could get really stuck in to the cargo operations due to already having a basic knowledge. I enjoy the technical side involved and all the regulations keep you learning and on your toes. I definitely think this is an area that I would like to work in after achieving my Certificate of Competence.

November soon came round and once again I found myself walking down the gangway with almost 10 months sea time now accrued. A short month at home allowed me to catch up with my friends and family before once again setting off on my final ship, the P & O owned cruise ship Oriana for a just shy of 4 month appointment. The Oriana was built in 1995 and sailed exclusively from Southampton. Before joining I had very little idea what to expect on-board as all my experiences prior had been cargo. I was especially taken aback when a large parcel arrived at home full of formal jackets, cummerbunds, double breasted jackets, etc.

I arrived on the quayside and stared up at the 280m cruise ship. This was by far the largest ship I had sailed on, even if was the smallest in the P & O fleet. Unlike my quick familiarization on B Gas it took me over a week to get used to the location of the important items on-board as it’s like a maze. I was walking for about 5 minutes to find the laundry, only to realize there was another one 30 seconds in the other direction! 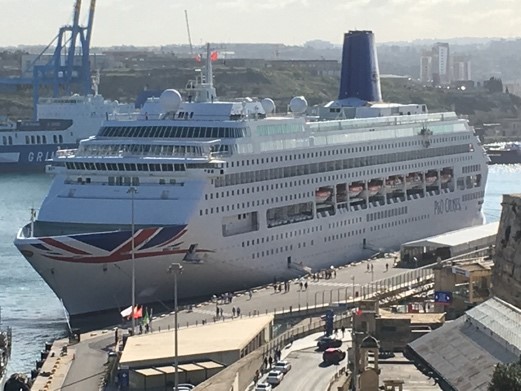 Again, I went straight onto watches. I joined the 4-8 watch which is very important on cruise ships as this usually deals with all the arrival and departures from port. I certainly got a lot of practice in this area of Watchkeeping! The cruise ship started off sailing round the Mediterranean, then round the Canaries a couple of times before having some short party cruises to Amsterdam and Bruges. The vessel was then scheduled to do a 50 day cruise to the Caribbean however, due to technical issues we got re-routed to a three week dry dock in Hamburg.  Upon leaving here the Canary cruises started again (If anyone’s wondering you can have too much of the Canaries, this was my 4th Cruise round here within 3 months) before a final sailing up to Norway to see the Northern Lights.

Oriana was an excellent ship to finish my cadetship on as the officers on board were a wealth of knowledge. With most of them being British as well they had a good understanding of the process and what the Orals examination was like. I therefore spent any quiet watches being bombarded with questions on COLREGS, legislation and procedures. Another useful part of my training was the Passenger Ship Safety Certificate Survey that was conducted whilst I was on-board. I spent two weeks crawling all over the ship with the surveyor learning more in depth knowledge on the structure and fittings that are required on a passenger ship. 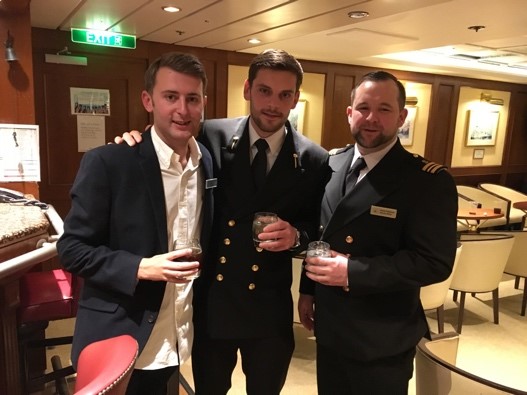 By far my favourite moment on-board was when the captain let me manoeuver the ship off the berth in Funchal Madeira. It was very nerve-racking but exciting to have the con and slowly push the stern off the berth monitoring the situation and putting all my knowledge to the test.

Life on-board a cruise ship was certainly very different to what I was used to; the pure volume of people, 780 crew/ staff, for starters. The choice of restaurants to eat in, the use of bars (or the cheap ward room for officers), and the ability to watch the shows in the evening were all welcome additions. The surprising factor was that my overtime consisted of going to cocktail parties or hosting a lunch table. Another benefit of the cruise ships is the ports you visit, I was very used to tanker ports that are on the outskirts of small towns, however now we were going in the centre of bustling busy cities. Whilst here I could explore the towns, enjoy go karting, swing from trees on the high ropes or sample a lot of local cuisine.

Eventually however it was time for the ‘work’ to end and for me to walk down the gangway for the final time as a cadet, with 13.5 months sea time under my belt and ready to head back to Warsash for the final few months before that all important orals examination.

Complete your name and email to receive free download.
Send Me The Guide