When considering joining the merchant navy, it is important to have a firm understanding of the departments, hierarchical structure and respective ranks aboard commercial vessels.

Many jobs at sea are regulated within the STCW Convention and as such have been standardised across the merchant navy.

In this article, we give you, prospective merchant navy cadetship students, an overview of the deck department to help you make an informed decision as to which department and discipline you would like to study.

What is the Deck Department?

In the merchant navy, the Deck Department is an organisational team within led by deck officers under the overall command of the ship’s captain.

The core responsibilities of the deck department are; vessel navigation, supervision of cargo, the stability of the ship, ensuring maintenance of the deck and upper hull structure, mooring, and anchoring operations. 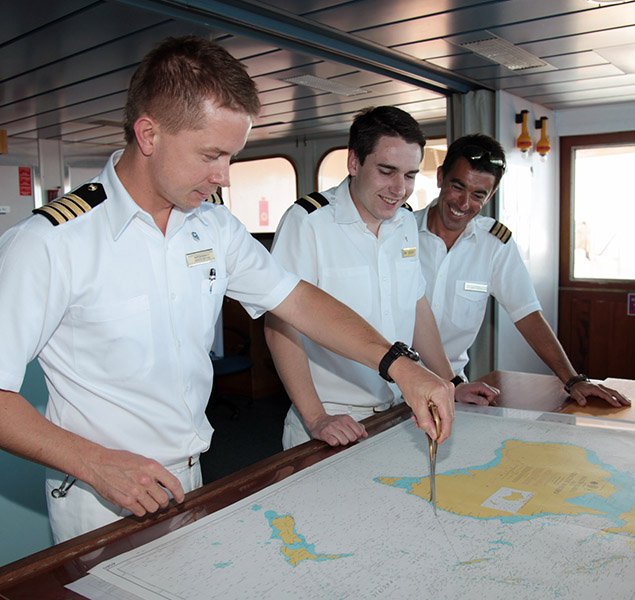 What is a Deck Officer?

A Deck Officer is an encompassing term for the officers that work within the deck department including (in descending order of seniority); Captain, Chief Officer, Second Officer, Junior/Third Officer.

“Officer means a member of the crew, other than the master, designated as such designated by national law or regulations or, in absence of such designation, by collective agreement or custom” … “Deck Officer means an officer qualified in accordance with the provisions of the [STCW] convention.” – STCW Convention

Qualification Requirements of a Deck Officer

In order to become a Deck Officer in the merchant, navy delegates are required to be 18 years of age or over and be in accordance with the regulations set out by the STCW Convention including;

“have performed, during the required seagoing service, bridge watch-keeping duties under the supervision of the master or a qualified officer for a period of not less than six months” – STCW Convention 95

“meet the applicable requirements of the regulations in chapter IV, as appropriate, for performing designated radio duties in accordance with the Radio Regulations” – STCW Convention 95

“have completed approved education and training and meet the standard of competence specified in section A-II/1 of the STCW Code.” – STCW Convention 95

How to Become a Deck Officer 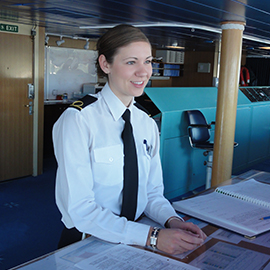 The primary route to becoming a deck officer in the merchant navy is via a Deck Officer Cadetship.

Much like apprenticeships, cadetships are a paid educational opportunity with vocational “hands-on” experience mixed with classroom study, allowing you to qualify with a Higher National Diploma (HND) or Foundation Degree.

Here at Chiltern Maritime, we have remained the UK’s foremost provider of Merchant Navy Officer Cadetships for over 30 years. With a first-class reputation and an 85% success rate, our government approved cadetship programme has been assisting maritime charities and commercial marine organisations to invest into Deck, Engineering and Electro-Technical Officer Cadets, qualifying some of the highest calibre graduates, highly sought after within the industry.

Applying for a Deck Officer Cadetship

The Chiltern Maritime online cadetship application process is the official route for application to a Deck Officer Cadetship with many of our sponsors.

HND in Marine Operations – Deck Officer of the Watch

Foundation Degree in Marine Operations – Deck Officer of the Watch